Our contributor gjr released his new great them zpBase a few day ago. He sadly has abandoned all of his older themes and plugins now because of lacking time maintaining them.

Therefore we moved copies of all his themes we had copies of to our unsupported GitHub repository being the archive of old abandoned ZP stuff. The themes zpFocus, zpMinimal and zpMasonry had been generally updated to work with Zenphoto 1.4.5 by acrylian a while ago. You can see the status of all other things on gjr's contribution page.

Also gone are all themes and plugins by contributor The Whole Live To Learn as the linked website appears to be gone. His flag_language_selector plugin is obsolete (...)

Zenphoto 1.4.5.9 is a security and bugfix release. Multiple minor errors are corrected.

As usual we recommend all users upgrade for the latest updates and fixes. For more detailed info about the fixes please review the GitHub issues list.

A Polish translation repectively adaption of our theming tutorial:
http://www.bpabak.pl/motywy

A modern workflow for it using grunt and bower so far for:

Zenphoto 1.4.5.8 is a bugfix release. Multiple minor errors are corrected.

As usual we recommend all users upgrade for the latest updates and fixes. For more detailed info about the fixes please review the GitHub issues list.

Now for picturefill 2.x with the new <picture> element.

Zenphoto and the Security Community Nov 06, 2013

The Zenphoto team typically works in conjunction with the Security Community to insure you, our users, can be confident in the environment we provide. The unfortunate nature of software is that bugs creep in. When some of those introduce security issues we are grateful to the Security Community for pointing them out to us.

We take any report seriously

A typical scenario is that a researcher will discover a potential flaw. He will develop an example exploit to verify his hypothesis, and then he will send a report to us describing his analysis and including the example exploit. This is proper scientific methodology consisting of a hypothesis and an experiment to validate it. The two are really integral components. A hypothesis without an experiment is simply speculation without substantiation.

We receive the report, verify that the problem still exists, and if so attempt to speedily correct the issue. The correction will always go into the current support (...)

This release fixes a critical issue in the Zenphoto 1.4.5.6 involving storing characters with diacritical marks. You should immediately upgrade if you were using 1.4.5.6.

Zenphoto 1.4.5.6 is a bugfix release. Multiple minor errors are corrected.

As usual we recommend all users upgrade for the latest updates and fixes. For more detailed info about the fixes please review the GitHub issues:https://github.com/zenphoto/zenphoto/issuesÂ list.

This reference is meant to show the main table relations.Therefore not all tables created by Zenphoto are included and also only those fields that are interconnected.

Please use a tool like phpMyAdmin or the Database reference utility on the Zenphoto backend to see the full details of all data- base tables.

If coding for Zenphoto avoid to use direct MySQL queries and use the object model instead. 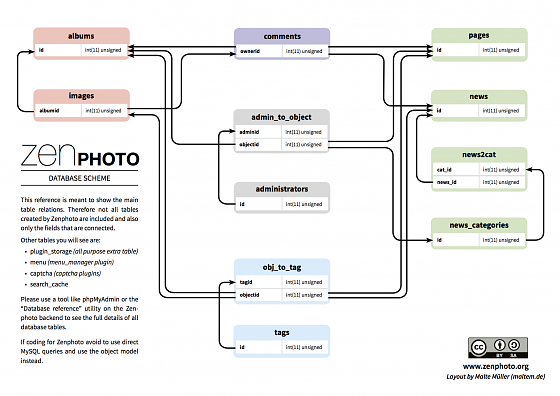